Treasure Tokens are golden rotating objects that are hidden in all levels in Mech Mice Tactics. Tokens resemble the shape of the Mech Mice logo. All levels have 3 different treasure tokens; each contribute points to the overall total score, and you also receive Gears (Currency). Each token is worth 20 Gears. Some are very well-hidden (for an example, in Desert Ambush and Fighting Frenzy) and other tokens are easier to find.

When an employee at Hyper Hippo Productions plays the web version of Mech Mice Academy, they will have a treasure token symbol beside their name on the score board and their name marked in blue when seen in-game. This will not be seen if you use the downloaded version. 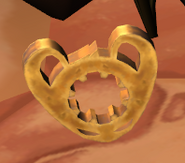 A token during development.

A Hyper Hippo employee (MechMoose) with a treasure token on Mech Mice Academy.
Community content is available under CC-BY-SA unless otherwise noted.
Advertisement