The Spy Bug is a variant of the Small Bug in Mech Mice Tactics. It is a weak Dark Union force and can be defeated easily. They first and continuously appear throughout Chapter Two of Season One. Spy Bugs can see through Recon Units' stealth. They can be confused with the Small Bug due to their similar appearances, though they are slightly weaker than them and have a distinctive light mounted on their backs.

The Spy Bugs in-game model (untextured) and its programming files. 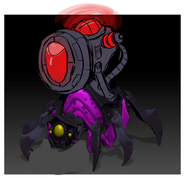 The Spy Bug's concepts.
Add a photo to this gallery
Retrieved from "https://mechmice.fandom.com/wiki/Spy_Bug?oldid=17538"
Community content is available under CC-BY-SA unless otherwise noted.