The Sniper Rifle is a weapon used by Recon Units. It is has a very long firing range, with the disadvantage of being weak. It can fire power shots- crazy powerful slugs that can take down medium-sized Bugs in one hit, though they are limited to three per level. The Sniper Rifle appears in Mech Mice Tactics and Mech Mice Academy .asset files and is used exclusively by Dusty and Sigma.

Concept art of the Sniper Rifle. 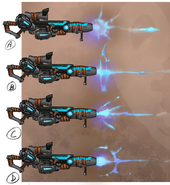 Different views of the Sniper Rifle.
Add a photo to this gallery
Retrieved from "https://mechmice.fandom.com/wiki/Sniper_Rifle?oldid=17244"
Community content is available under CC-BY-SA unless otherwise noted.