Shards were found in multiple locations giving great supernatural power to the mice who protected them. Those who protected them were known as the Mech Mice. Those who abused its power were known as the Dark Union. One of the first instances of abuse by the Dark Union was from one of its members, Termina who stole a Shard and used it to improve her Bug army.

Shards granted extended life as well as vast knowledge. Their presence has the mental capability to topple governments as well as build them up. In many cases, the Shards grant extended life, being that some concepts show mass oasis' surrounded by a desert-type biome. Mice inhabit places around Shards.

A visual representation of the fact that shards give life, note the oasis within the desert.

A fan story on the shard origins, written by Echaniwarrior. 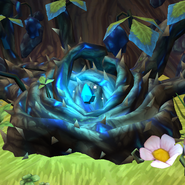 A shard being used by Queen Termina to enhance her bugs.

Side by side comparison of a Shard before and after being seized by Termina.