Radar Towers are transmittal objects in Mech Mice Tactics. They only appear in The Beginning. Flank and Blaze were set to a mission to re-activate them and find out why they were deactivated in this mission. Blaze makes a comment about the first radar tower in The Beginning to have been bitten or chewed, which was later revealed to have been a Bug. 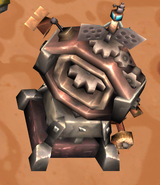 A radar tower before being activated.

A radar tower after being activated.
Add a photo to this gallery
Retrieved from "https://mechmice.fandom.com/wiki/Radar_Tower?oldid=16859"
Community content is available under CC-BY-SA unless otherwise noted.