Omega is the Founder Mech. On October 8, 2013, People who bought the Founders Package during the Beta Test received Omega on their account. It was the fourth Founder milestone during the Beta Test. It is the most powerful character available, with stealth capabilities and massive firepower. Any Bug can disable Omega while invisible as long as they are in melee range of it (usually about 3 Hexagons).

Similar to all the other Founder Units, Omega is now available for all to use after a major update to Mech Mice Tactics.

Created by Tate the Master Tinker himself, the Omega is the first Mech ever to be retrofitted with stealth capabilities. With the ability to slip behind enemy lines and unleash its deadly firepower, the Omega is one of the strongest weapons in the Mech Mice arsenal. 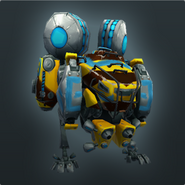 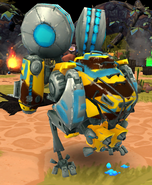