Mech Mice Genesis Strike is the first Mech Mice book that was written by the Miller Brothers and illustrated by Cale Atkinson. It was announced on March 23rd, 2011, when the first chapter was released online. The whole book can be read for free at the publisher's website.

It's believed that Rsnail (Lance Priebe) decided to have a book made before his new game, Mech Mice (later called Mech Mice Tactics), came out. Lance wanted to do this so that the book could attract players to the game, that way a large crowd would be waiting for the game to come out. The book has been worked on for about a year, having the chapters being changed in the fall.

On July 6th, 2011, Lance posted on the RSG blog saying, "We need your help. Which Mech Mice book cover do you like the most?". Readers were able to choose witch cover the book should have at this post. However the covers were replaced with a whole different image.

On January 19th, 2012, the book was announced published. The book would have appeared on Amazon a couple weeks after the post, but there were some issues. Christopher Miller said on Twitter, "Ears up, mice! We resubmitted the Mech Mice book to our printer today with fixes on print margins. Anxiously awaiting the first copy!" The book appeared on Amazon Februrary 17th, 2012.

A week after the publishing issues, the book was finally put on Amazon. At first it was a Kindle edition, but soon the paperback edition was published. The paperback can be purchased from Amazon. Iron-on patches were made if you bought to book on the Miller Bros website for the first 1000 people.

A rookie squad of Mech Mice misfits get more than they bargained for when a simple recon mission to Liwa suddenly turns into a full blown conflict with a newly discovered army of cybernetic bugs bred to destroy. But when communications with the Burrow go awry, the squad begins to wonder if their mission wasn’t setup for failure to begin with.

Could it be that the Dark Union has infiltrated the Mech Mice leadership? Will the squad be able to unveil who is behind the threat before the Burrow is completely destroyed? 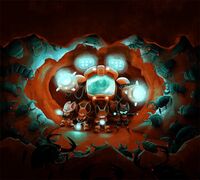 One of the draft covers for the book.

Older versions of the book's cover. With a different name.

The artwork used for the cover.