Magenta, or Maggy (as called by Streak) is the only main female protagonist in Mech Mice Genesis Strike. Her character was used to add drama, romance and to attract female readers.

At first, the Miller Brothers (authors of Mech Mice Genesis Strike) made her an original member of the Genesis Squad. But due to some fans' thoughts, they changed the whole book, including her. Magenta was then used as a character who joins the Genesis Squad later on in the book, as a tough mouse unlike the original one before her. Magenta is also known as a deadly opponent because of her skills with blasters.

Some amount of Magenta's history outside of the Mech Mice Academy is known. In the book she's depicted as a doe on her own, with no family. As a child, Magenta's parents disowned her. Only until she met the Genesis Squad does she think she had some friends. She was previously lieutenant of the Alpha Squad, but was kicked out by Nitro due to an injury. After that, the majority of her time was spent at The Pit.

She is a strong mouse with a stronger personality. She used to fight with mice in the Pit to win marks and was furious when Nightshade fought with an albino rat, which would be her next opponent in order to win a bet, showing a fierce part of her personality. At first, Magenta did not approve of the Genesis Squad, but learned to be more outgoing with them as time passed.

Magenta threatens other mice when they are disrespectful to her, and likes to burn off her anger by fighting.

When they first met, Magenta thought that Ziro was stalking her, but he then revealed he wanted to invite her to being the Genesis Squad's Lieutenant. Although she was offered a high position, she only accepted after knowing she'd get 20,000 marks (10,000 being given by Ziro as a reason for her to join the squad) and by the fact she would have the chance to shoot her blaster on duty.

Nightshade is the first mouse of the squad Magenta interacted with. She tried to knock him out for "stealing her fight" in which she made a 1,000 marks bet. When he is formally introduced to her in Platform 99, she remembers the event, but shows no hard feelings and Nightshade politely apologizes.

Magenta did not have a good first impression of Streak. When the two first met, Streak was extremely arrogant towards her, calling her "Maggy" and claiming to be her new boyfriend. Magenta then threatened him, causing him to admit he was only trying to be friendly. 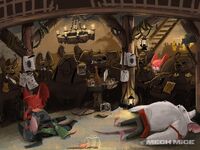 Magenta threatening Ziro with her dagger.

Magenta and the rest of the Genesis Squad at a Liwan feast.

Magenta with a damaged leg with Ziro round a campfire.