Lance Priebe, Rocketsnail or Rsnail, is a Canadian from Kelowna, British Columbia is currently the owner of RocketSnail Games. He is the founder and chief commercial officer of Hyper Hippo Productions. He is well known throughout the online gaming world, and has many fans.

Lance Priebe's birthday is unknown, though he may be in his mid 30's. Lance is married and has three children. About thirteen years ago, Lance started to create online, virtual games/worlds. In 1999 he founded Rocketsnail Games, and created a large variety of games. In 2000 he started the Penguin Chat series, which was increasingly popular. In 2005, he co-created a game called Club Penguin. Club Penguin became extremely popular, and was eventually sold to the Walt Disney Company in 2007. After selling Club Penguin, Lance started to collaborate with Disney more often. He became a lead game designer, a lead action script programmer, and an inventor. Lance quit working with Disney a few years ago, and brought Rocketsnail Games back right before 2011. Lance is currently the CEO of Rocketsnail Games, and lead game designer of his company. He still well known on the internet, and currently has no plans for RocketSnail Games becoming a major company.

A quintessential inventor, Lance is equal parts designer, artist and entrepreneur. Along with his partners, he co-founded and created Club Penguin, selling to The Walt Disney Company in 2007 for $350m and becoming the largest children's online game in the world.

He is a fourteen year veteran of the online game industry with a focus on finding solutions for new properties.

Lance's personality is heavily unknown. It is, however, known that he is very imaginative, and a nice person. He continues inventing and creating. It's hard for him to stay on one project at a time, which is why he quit Club Penguin to pursue other dreams. 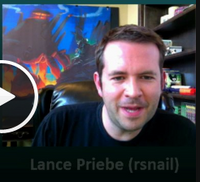 Lance on the live chat.

A 3D model by Lance.