Johnny Jansen, or MechMoose was the Community Manager and Video Videographer for Hyper Hippo Productions. He created and published development videos to all of Mech Mice's social media. 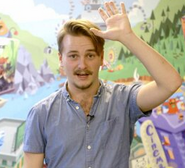 Johnny in real-life.
Add a photo to this gallery

Retrieved from "https://mechmice.fandom.com/wiki/Johnny_Jansen?oldid=16819"
Community content is available under CC-BY-SA unless otherwise noted.