Flank is the deuteragonist in Chapter One of Season One in Mech Mice Tactics. He is a large and boisterous Heavy mouse who loves to eat, drink and tell lots of stories. He has a loud and infectious sense of humor, and is genuinely friendly to everyone. Though sometimes he has problems minding his own business or keeping secrets, he’s always a reliable source of practical advice and unique opinions.

Flank is first seen near the first Radar Tower sleeping on the job. Blaze, the mouse he is supposed to guide, wakes him up abruptly and he quickly introduced himself and his abilities. The two unexpectedly encounter a few bugs, which he take care of. They decide to move to the village of Tumbleweed to secure the Shard there.

In this second mission, Blaze and Flank get to Tumbleweed to see if the bugs have been there. Along the way they face several enemies and ambushes.

The team of the two mice find the closest village, Tumbleweed in ruins by the Dark Union. They secure the village and check on the shard. Several bugs are deployed by an enemy leader called Queen Termina and both must destroy them.

In this mission, Termina is questioned by the mice, she quickly introduces herself with claiming the land is therefore ruled by the Dark Union. She gives the two mice a chance to live. Flank and Blaze refuse and a fight ensues with two Medium Melee Bugs and ultimately, Frenzy. Near the end she escapes with the Shard.

The desert is stormed as Termina throws several forces against the opposing team along with several traps, they eventually catch up and confront her.

Flank is a mouse who wears heavy armor, and wields a Heavy Blaster. He appears in Chapter One, and is the second mouse you play as. He is a patron of Tumbleweed and is fond of its villagers. He seems to like being a Heavy Unit and is very powerful in combat, but he has a lower movement range than Blaze. 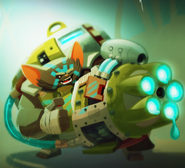 Pi and Flank as they appear in-game. 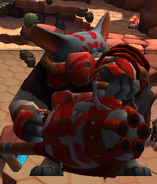 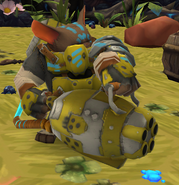