Dusty is the main protagonist of Chapter Two in Season One in Mech Mice Tactics. He is the squad's recon specialist, and an unrivalled marksman. Hailing from a hot and arid land, he is at home in the extreme heat. He tends to get cold in any other climate, and is often coming down with the sniffles; he is actually a bit of a hypochondriac.

Dusty has two special abilities; stealth and power blasts. Stealth allows you to sneak by any bug unseen, unless you shoot them or encounter a Spy Bug. Power blasts allow you to blow up a medium sized bug in one hit.

Dusty is the main protagonist of the second chapter. Giving a tutorial on his character, he then starts with a scouting mission around Roden at night, while around he finds suspicion of Dark Union bugs. He goes after these bugs in an attempt to halt them and alert the higher ups at Desert Base 1. Near the ending he finds a distress mission from a female Engineer named Torq. At the end he sets off to find her.

Dusty is led to Fire Crown Volcano where he investigates his whereabouts on Torq and her distress message. While here, he is introduced to the Spy Bug and stealth through most of the mission. It ends with him at the doors of the Dark Union megabase guarded by two Scorpions.

In this level, Dusty enters the base and goes through several obstacles. He uses stealth approach and goes through several challenges to get to Torq. Through this mission, there are several electrical gates used, he must turn off switches in this level to deactivate them and move along. After he gets to the blue end pad, a cut-scene finding Torq ensues. Torq insists that she must have her Dynamo gear to power up her mech and escape the Dark Union base.

In a seemingly empty lair, Dusty goes in to find Algernon, the main antagonist, to be talking with Termina, a superbug of his creation that was shortly destroyed not long after. He sees Algernon go to his workstation and proceeds to go get the Dynamo. Facing no enemies, he is then seen by Algernon, who experiments "how long he can live" against FrankenBug. Dusty defeats him and runs out with the Dynamo.

After returning from Algernon's Laboratory, Dusty gives Torq the Dynamo needed to power the Mech, Betsay. She then tells him she needs to repair Betsay. The Dark Union forces are alerted to their presence and Dusty must fend off the forces, thinking that they will not prevail the odds. Dusty fights off the first round of bugs as they progressively get harder and larger with more variants. Torq then re-engineers, and oddly names, a Dark Union averaged sized bug to assist Dusty. After he is destroyed, she deploys a medium and large sized bug to help the pessimistic recon with the remaining forces. Just as the last and strongest wave appears, Torq fires up Betsay and destroys the remaining forces.

Torq's special ability is introduced in this level and gives Dusty Betsay to use. The two go through several enemies before they are encountered by Algernon, again using the mice in an experiment. The two go through an explosive trap and then are met with several enemies, most commonly Destroyer Bugs. They learn that Algernon has set them up and planned and let Dusty get through his base, despite the loss of the several bugs, for experimental testing on them.

The two mice in this level are split apart by Algernon.  Dusty must activate switches for Torq and Betsay to get through and meet up with him. Once they do so, they head for an escape.

Torq and Dusty flee the base and in a small area, and are attacked by a S.A.W commissioned by Algernon. Once it is defeated, the two finally escape. Algernon commences for a full fledged attack on the Mech Mice Colony, for the rest to be continued in Chapter Three. 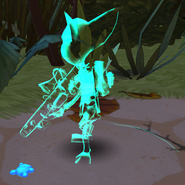 Dusty in stealth mode at the end of The Dark Path.

Dusty using his power shot ability while being developed.