Crates are destroyable objects in Mech Mice Tactics and Mech Mice Academy. While most crates are just scenario props, some of them might reveal Treasure Tokens when destroyed. The Dark Union uses crates to block paths, in order to delay the progress of a Mech Mice Squad through its mission. 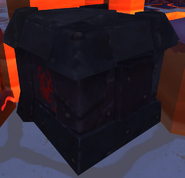 The Dark Union's crate design used in Mech Mice Tactics.
Add a photo to this gallery
Retrieved from "https://mechmice.fandom.com/wiki/Crate?oldid=16892"
Community content is available under CC-BY-SA unless otherwise noted.