Chris Hendricks, or Screenhog is a music composer, and 3D animator. He lives in Canada, and has worked on Penguin Chat 3 and Club Penguin. He is the Prototyper for Hyper Hippo Productions. He is most famous for his work on Club Penguin.

Much of Chris Hendrick's history is very much unknown on the internet. It is known that he's been working with RocketSnail Games and Club Penguin for a long time (since 2000). His penguin (Screenhog) was under hacking attacks so he had to request for his account to get locked. He left Club Penguin and joined Lance Priebe to create Mech Mice Tactics.

Chris appears to be a very creative and intelligent person. He likes to create music, and help other people out. As seen in his Il Soapbox comics, he is very interested in current events and controversial topics. 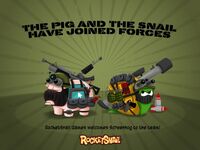 Banner of when Chris rejoined RocketSnail.