Box 'O Snails is a small chatroom-like game created by Rocketsnail Games. Within the game, players appear as snails. Players can present emotions and expressions via emoticons and make noises, but they are unable to directly chat through text. The game was developed and created using Unity3D similar to Mech Mice Tactics and Mech Mice Academy, and was used to serve as a test server for both Mech Mice Tactics.

Box 'O Snails was released on March 14, 2012 as a chat-based game. It was first announced in January 2012 on Lance Priebe's blog[1] . It was relatively popular when first released, but very few use it today (this has not been confirmed). BoS was released so Rocketsnail Games and Hyper Hippo Productions could test the server, 3D development, and coding skills. A couple months after the release, Lance Priebe (aka Rsnail) announced on his blog that The Box was being replaced with a Snail Dojo. The Dojo was to be released in late August 2012, but was not added. Lance also announced that he is slowly working on Box 'O Snails, but will get more involved after Mech Mice was publicly released.

Players are only allowed to share expressions by using emoticons, which gives the game a rather specific challenge. There are 8 face emoticons that the player can use. Since it is not possible to chat using written language, completing certain communication tasks can be immensely difficult. Also, unlike Mech Mice, you have to use the arrow keys to move around.

Box 'O Snails was created by a separate team in Rocketsnail Games. Currently, it is unknown which employees make up the team, and whether they are also currently working on Mech Mice Tactics. The game was created using Unity3D, and concept art for it was created byCale Atkinson. The sound effects and music were and are created by Chris (aka Screenhog). The team developed a 3D "skeleton," colored it, and then added detail to it. The full process takes weeks, even months, at a time.

Currently, the game consists of one room which most people refer to as The Box or the Snail Box. The Box is a large room designed to look like the inside of a cardboard box. In the right corner of The Box are two things, a small patch of grass and Grub Yums can that, with teamwork, players can climb on top of.

In the first update of the game, The Box was supposed to be replaced with the Snail Dojo. The Snail Dojo will not have any mini-games, though more secrets could be released with it, such as the possibility as the ever elusive snail sensei and possibly more easter eggs to Mech Mice. 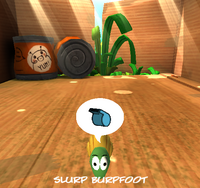 A snail expressing the whistle emote.

Concept art of the Snail Dojo. 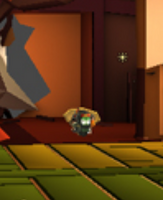 A full view of the box.