Blaze is the main protagonist in Chapter One of Season One of Mech Mice Tactics. Fearless and driven, Blaze loves nothing better than diving headfirst into battle. No matter what the odds, he's always ready to pick a fight. Brash, impulsive, and a bit of a braggart, he nonetheless has a short fuse- he can dish out the snark, but can rarely take it. He and Flank pursue several objectives in the desert such as traveling to Tumbleweed and chasing Queen Termina.  Blaze is the first playable character in Mech Mice Tactics during both the Beta Test and the official release. He, along with many other characters, have gone through multiple changes since then.

Blaze is introduced in the first mission as he is one of the main protagonists. He starts off welcoming the Commander (Player), to the squad. He explains he is the newest member and explains the mission to turn on the radar towers surrounding the area. After this dialogue, he shoots down two cactus' and moves forward to the first radar tower. Here he meets Flanka jolly heavy who he lectures for sleeping on the job. After Flank introduces himself to Commander, he and Blaze move to the second radar tower. Here they are ambushed by a group of bugs by the new invaders, the Dark Union. Flank advises he take out the largest and deadliest bug. As they destroy them, Flank and Blaze wonder what the bugs are. They continue as they are ambushed by several bugs, they eventually get to the end blue portal.

In this second mission, Blaze and Flank get to Tumbleweed to see if the bugs have been there. Along the way they face several enemies and ambushes.

The team of the two mice find the closest village, Tumbleweed in ruins by the Dark Union. They secure the village and check on the shard. Several bugs are deployed by an enemy leader called Queen Termina and both must destroy them.

In this mission, Termina is questioned by the mice, she quickly introduces herself with claiming the land is therefore ruled by the Dark Union. She gives the two mice a chance to live. Flank and Blaze refuse and a fight ensues with two Medium Melee Bugs and ultimately, Frenzy. Near the end she escapes with the Shard.

The desert is stormed as Termina throws several forces against the opposing team along with several traps, they eventually catch up and confront her.

Voting for Blaze's official name was held from May 6th to May 9th, 2013. Sixty-five percent of all fans that voted picked his name over Archer and Gage. 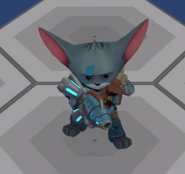 An early biography of Blaze.