Betsay is a Mech that can be used in Chapter Two of Season One in Mech Mice Tactics. It can be manned by any Unit, similar to Omega. It is very powerful, being the second most powerful character. Its special ability is Plasma Cannons and Doom Spin; Extremely high damaging plasma cannons that can take down Scorpions in a single hit, and a spinning combo attack that takes down all surrounding medium-sized bugs in a single hit. 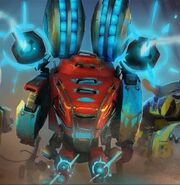 Betsay as it appears in The Fall of Beta Squad. 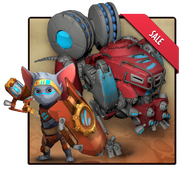 Brix and Betsay on the shop icon for units.

Broken Betsay as she appears in Mech Mice Academy. 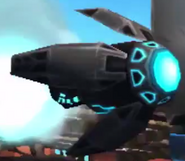 A Plasma Cannon used by Betsay in Mech Mice Academy.

Betsay in-game.
Add a photo to this gallery

Retrieved from "https://mechmice.fandom.com/wiki/Betsay?oldid=15907"
Community content is available under CC-BY-SA unless otherwise noted.