Not to be confused with the Beta Test.

Beta is a Grunt Unit in Mech Mice Tactics, which was given to beta testers of the game. Beta Testing started on July 9, 2013 [1], and those who participated received Beta. He was available from July 9 to October 7, 2013. He is now available to everyone, from March 1, 2014, after a major update.

Beta is the brawler of the Founders. Brash, rude, and a bit crazy – he just isn’t happy unless he’s on the battlefield taking down bad guys. Beta is determined to be stronger, faster, better and harder than any other Mech Mouse in history.

Beta in his full design finish. 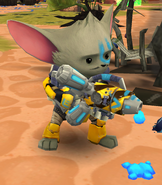