The Assault Blaster is used by the Commander class in Academy as the standard weapon of choice and is a feasible choice for any game mode. It has an ADS feature and will not overheat, nor does it run on a clip. It fires three shots at a time, and the rounds can be spammed without consequence. 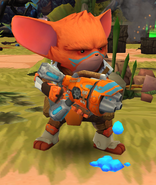 The model of Turner's Assault Blaster in Mech Mice Academy.