What's on your mind?

This is the place to talk about your favorite topic, to share news, theories, ideas, and to connect with others. The content from your Forum has been converted to Discussions posts, so nothing has been lost.

To learn more about what you can do here, check out community.wikia.com/wiki/Help:Discussions

If you're an admin on this community, read more about how you can customize your Discussions and set up guidelines for contributors: community.wikia.com/wiki/Help:Admin_and_Moderator_Tools_in_Discussions

Did you ever feel curious about those early MM prototypes from as early as 2011? They're VERY different from what we got:

Ever wanted to try one of these bad boys? Sure I wanted ;)

DenGreyFoot and Oktobor Animation has made statements on the future of Mech Mice. Please take in consideration of their comments;

hang in there gang! Mech Mice as a whole will be bigger than ever... ;)

Hey Mech Mice Fans.  This is Chris from Oktobor Animation.  I just wanted to thank you all for your support.  Creating a new world is a daunting task, but your enthusiasm is one of the highlights for all of us.  I know it's disappointing that the game is on hold, but I can tell you the brand and these mice are far from dead.  We just wrapped a pilot script and are pitching networks this month.  We have a toy partner lined up and have big plans for Mech Mice, not just in gaming but in animation and toys as well.  You guys are the original fans, I hope you'll stick around for the rest of the journey, it's not over yet and the best is yet to come.  Stay on touch on facebook.com/mechmice

Hi this is Chris Waters from Oktobor Animation.  I wanted to thank you all for your support and enthuasism.  I can understand your frustraion but wanted to encourage you, Mech Mice isn't going anywhere.  We're hard at work on a new animated series and toys, and fully expect to have an awesome gaming experience to go along with the series as well.  Hyper Hippo is indeed working on other games, but Lance is still a believer in the brand and is just as excited about us as where we're taking it.  You guys will always be our original fans, and while I totally undersand your disappointment, I hope you'll stick around and join us for the ride the best is really yet to come and we need your energy, support and enthusiasm to get there!  Stay connected here and facebook.com/mechmice

And let us know what you'd like to see in an animated series and future games.

What are your thoughts?

Hey all, like I said in my blog post we should have a community event to go out with a bang. What are your ideas guys? Let's hear it!

Hey, I decided to make a list of what I see as some of the most formidable foes I have fought in MM. If I haven't played against you much, you probably aren't going to be on the list, yet. This is ranked 1-20, and updated regularly. Enjoy.

I felt we needed a place to discuss about the future updates that Hyper Hippo has announced, or at least hinted for MMA, so I created this thread. Some exciting stuff is coming soon, so, what are you looking forward the most?

Hello all! I've decided to pick up Decade of Commando's activity. So, first I want to make it more organized, I have designed four squadrons that will all have seperate battle dates and members. Here we go:

Signup (write these in the comments):

Thanks, have a good day everyone! - General Sith of DC.

For those of you that don't know, HH has halted work on most things Mech Mice related. For those of you that keep up with their sugar-coated tweets, we know that they did not get their expected quota of players for the beta, and that they need a popular, well selling game in order to carry their company. Seriously, it is very well possible that we may lose Mech Mice to statistics. Trust me, I will be incredibly pissed if I lose a game I have been waiting a good 2 years for, and have a wiki that would then be useless to an outdated game. But we are the fans, we can change all this. I thought some last night and if we advertised Mech Mice to a broader community, we might be able to boost the pupularity of MM and allow HH to continue its work upon it. I need ideas from you. We cannot accomplish this unless we do it together.

Hey all, seriously recomending that we all dive into the package contents of the recent OoB application for Mech Mice. I've begun doing that and I've found a wealth of information in .asset files and other resources like that. Be sure to bring a decrypter though, as Unity encrypts their asset files as such. If you haven't already noticed I've begun to add some of the information I gathered whilst within those files to the wiki, and I can't do it all on my own.

For those that have no idea what I am talking about, I am simply asking you to right click on the application of "Academy" and click "View package contents". From here, you have all of the resources of Academy at your fingertips for you to explore and edit at your own will. Have fun!

Edit: This thread has blown up, thanks to everyone who's helped and contributed to ripping information from MM! Special thanks to SenaUW for his continued effort and work with his information gathering.

Hey guys, after the tweet that MechMoose, aka Johnny Jansen, is leaving Mech Mice, should we delete the page about him, since he is no longer associated to Mech Mice? Although he did contribute to Mech Mice, he's leaving.

After the recently found content in Tactics, I started to wonder about some of the planned features that never made it to the game. Features such as:

-Experience Points: the more you progressed through the game, the more experience your units would get, eventually earning levels and improving their skills, as well as enabling some customization options.

-Shard Fragments: unknown use, could have affected the abilities of the unit that used it.

-Mech Suits: players would be able to pick Mech Suits to use before each level.

-Multiplayer: playing with (or against) others would be possible in this year.

Even villages and burrows were considered to be included, but this never happened. What do you think about this? Which features you wanted to see?

(edited by SenaUW)
do you think we will ever gonna get more playable bugs like in this level? i just llove the idea of that.
(edited by Vision0)

It is an idea for season 2 of mech mice tactics. and maybe if you say it's good, a fanfic.

you get a unit like demo in mm gensis strike and another one.

after the bugs and algernon's invasion were stopped, two mice are going under the ground to make sure no bug has escaped, and there, they will find snakes,that always been enemies to the mice and they have a lot of toxins in their body,  but now, the snakes' king is  declaring a war on the mech mice colony and will upgrade himself and his army with bugs' upgrades and stronger toxins. what do you think?

What do you guys think?

It's finally here guys! An out of browser application for Academy. I know what I'll be spending a good percentage of my doing now, as I've really been waiting on it to be released. I highly suggest you download the application and play it from there.

Thank you Paul Moore for coding and creating this application!

It's finally here guys! An out of browser application for Academy. I know what I'll be spending a good percentage of my doing now, as I've really been waiting on it to be released. Most of all though, I can't wait to play with you guys. Me being inactive on the wiki has stopped me from interacting with one of the best communities out there, you guys are really awesome! Anyways, I highly suggest you download the application and play it from there.

Let's not forget to thank the awesome software developer Paul Moore for designing and coding a working application for us!

For those who want Mech Mice Tactics as the main game and Mech Mice Academy as the second.

Comment "YES!" if you want the old Mech Mice back and anything else you guys want! We'll send this petition to Mech Mice once we have enough people in.

Your thoughts and suggestions, community!

(edited by Dokuganyx)
Decided to give designing another go, as I was generously given a subscription to the creative cloud a month ago and intend to use it. I have a logo going, the image attached is the progress I have made. The look I'm really going for here is retaining the main "mouse" portion but incorporating a wiki sprecific logo to go along with it.
(edited by Xonius) 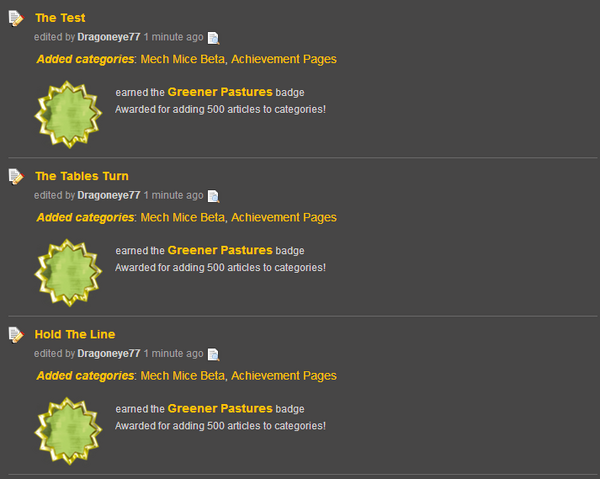 Lol. I guess this is what happens once you click 'Publish' at the same time. I didn't get dat extra 200 points though ;)